Shock waves emerge in various fields and trigger effects like rogue waves, supercontinuum generation and emission of resonant radiation. Despite shock waves ubiquity, their effect on the coherence properties is barely understood. Among the open problems, the quantum features of shock waves are particularly intriguing for the possibility of generating non-classical states by highly nonlinear regimes. In a manuscript in arXiv, Maria Chiara Braidotti, Antonio Mecozzi, and Claudio Conti theoretically predict classical squeezing of light during shock formation. The picture above shows the Wigner transform of the field in the squeezed regime. By using techniques of rigged Hilbert space quantum mechanics, they show that a coherent state develops squeezing which stops in proximity of the shock point. The analysis holds true for temporal and spatial shock waves in highly nonlocal regime.These results open a new scenario in shock phenomena and link nonlinear propagation in extreme regimes with quantum optics and related applications.

The results of the team of the Vanguard project presented at at the 60th annual meeting of the Biophysical Society, in Los Angeles appeared in Physics World

The research has been spotted by the Dailymail !

Press release in the Netherlands 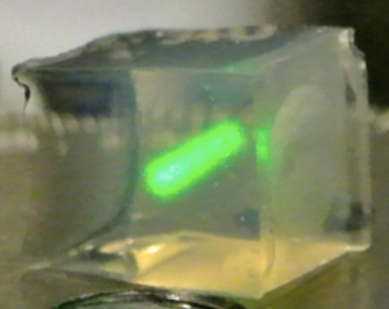 We study the non-relativistic limit of quantum fields for an... END_OF_DOCUMENT_TOKEN_TO_BE_REPLACED