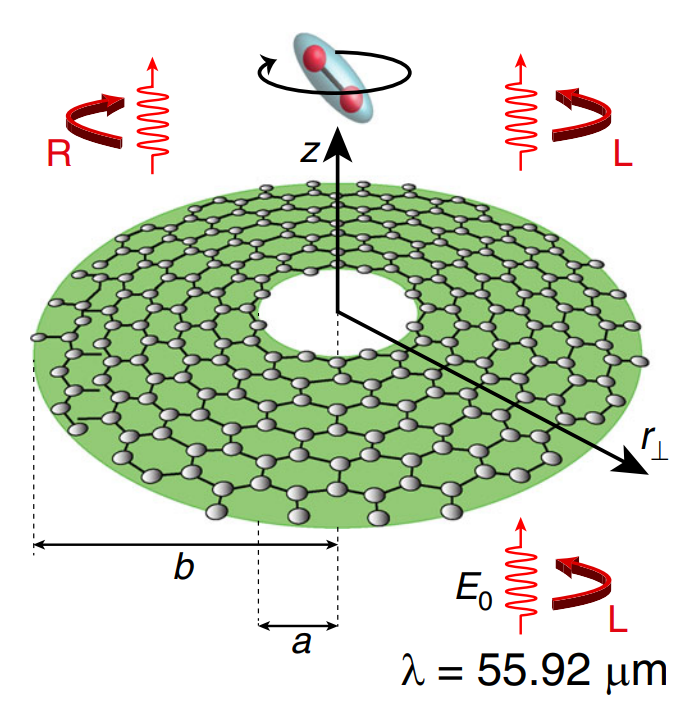 Terahertz absorption spectroscopy plays a key role in physical, chemical and biological systems as a powerful tool to identify molecular species through their rotational spectrum fingerprint. Owing to the sub-nanometer scale of molecules, radiation-matter coupling is typically dominated by dipolar interaction. Here we show that multipolar rotational spectroscopy of molecules in proximity of localized graphene structures can be accessed through the extraordinary enhancement of their multipolar transitions provided by terahertz plasmons. In particular, specializing our calculations to homonuclear diatomic molecules, we demonstrate that a micron-sized graphene ring with a nano-hole at the core combines a strong near-field enhancement and an inherently pronounced field localization enabling the enhancement of the dipole-forbidden terahertz absorption cross-section of H+2H2+ by 8 orders of magnitude. Our results shed light on the strong potential offered by nano-structured graphene as a robust and electrically tunable platform for multipolar terahertz absorption spectroscopy at the nanoscale.

A. Ciattoni, C. Conti, and A. Marini in Communication Physics

Dispersive shock waves in thermal optical media belong to the third-order nonlinear phenomena, whose intrinsic irreversibility is described by time asymmetric quantum mechanics. Recent studies demonstrated that nonlocal wave breaking evolves in an exponentially decaying dynamics ruled by the reversed harmonic oscillator, namely, the simplest irreversible quantum system in the rigged Hilbert spaces. The generalization of this theory to more complex scenarios is still an open question. In this work, we use a thermal third-order medium with an unprecedented giant Kerr coefficient, the M-Cresol/Nylon mixed solution, to access an extremely-nonlinear highly-nonlocal regime and realize anisotropic shock waves. We prove that a superposition of the Gamow vectors in an ad hoc rigged Hilbert space describes the nonlinear beam propagation beyond the shock point. Specifically, the resulting rigged Hilbert space is a tensorial product between the reversed and the standard harmonic oscillators spaces. The anisotropy turns out from the interaction of trapping and antitrapping potentials in perpendicular directions. Our work opens the way to a complete description of novel intriguing shock phenomena, and those mediated by extreme nonlinearities.

The math of irreversibility

We study photonic crystal fibers and ring resonators with topological features induced by Aubry- Andre-Harper modulations of the cladding. We find non-trivial gaps and edge states at the interface between regions with different Chern numbers. We calculate the field profile and eigenvalue dispersion by an exact recursive approach. Compared with conventional circular resonators and fibers, the proposed structure features topological protection and hence robustness against symmetry-preserving local perturbations that do not close the gap. These topological photonic crystal fibers sustain strong field localization and energy concentration at a given radial distance. As topological light guiding and trapping devices, they may bring about many opportunities for both fundamentals and applications unachievable with conventional optical devices.

News and Views on Nature Photonics by Claudio Conti and... END_OF_DOCUMENT_TOKEN_TO_BE_REPLACED