One of the most controversial phenomena in nonlinear dynamics is the reappearance of initial conditions. Celebrated as the Fermi-Pasta-Ulam-Tsingou problem, the attempt to understand how these recurrences form during the complex evolution that leads to equilibrium has deeply influenced the entire development of nonlinear science. The enigma is rendered even more intriguing by the fact that integrable models predict recurrence as exact solutions, but the difficulties involved in upholding integrability for a sufficiently long dynamic has not allowed a quantitative experimental validation. In natural processes, coupling with the environment rapidly leads to thermalization, and finding nonlinear multimodal systems presenting multiple returns is a long-standing open challenge. Here, we report the observation of more than three Fermi-Pasta-Ulam-Tsingou recurrences for nonlinear optical spatial waves and demonstrate the control of the recurrent behavior through the phase and amplitude of the initial field. The recurrence period and phase shift are found to be in remarkable agreement with the exact recurrent solution of the nonlinear Schrödinger equation, while the recurrent behavior disappears as integrability is lost. These results identify the origin of the recurrence in the integrability of the underlying dynamics and allow us to achieve one of the basic aspirations of nonlinear dynamics: the reconstruction, after several return cycles, of the exact initial condition of the system, ultimately proving that the complex evolution can be accurately predicted in experimental conditions.

A landmark of statistical mechanics, spin-glass theory describes critical phenomena in disordered systems that range from condensed matter to biophysics and social dynamics. The most fascinating concept is the breaking of replica symmetry: identical copies of the randomly interacting system that manifest completely different dynamics. Replica symmetry breaking has been predicted in nonlinear wave propagation, including Bose-Einstein condensates and optics, but it has never been observed. Here, we report the experimental evidence of replica symmetry breaking in optical wave propagation, a phenomenon that emerges from the interplay of disorder and nonlinearity. When mode interaction dominates light dynamics in a disordered optical waveguide, different experimental realizations are found to have an anomalous overlap intensity distribution that signals a transition to an optical glassy phase. The findings demonstrate that nonlinear propagation can manifest features typical of spin-glasses and provide a novel platform for testing so-far unexplored fundamental physical theories for complex systems. 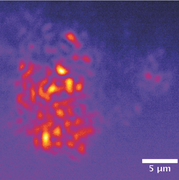 Living organisms have evolved well-adapted structures and
materials over geological eras. Through evolutional selection,
nature has devised effective solutions to all sorts of complicated
real-world problems and, following Leonardo Da Vinci,
humans have looked at nature to reach answers. The young
field of biomimetics has given rise to new technologies inspired
by nature’s strategy for materials and devices optimized from
the macroscale to the nanoscale.

The ERC Proof of Concept Grant VANGUARD, acronym for Versatile optomechanicanical graphene device for bio-tissue engineering aims at the realization of a novel bio-inspired laser-driven bio-templating approach for antibacterial surfaces and for tissue engineering.

The project lasts 18 months, ends in September 2016 and is funded by 150keuros

All posts about VANGUARD activities

Press release on the VANGUARD project