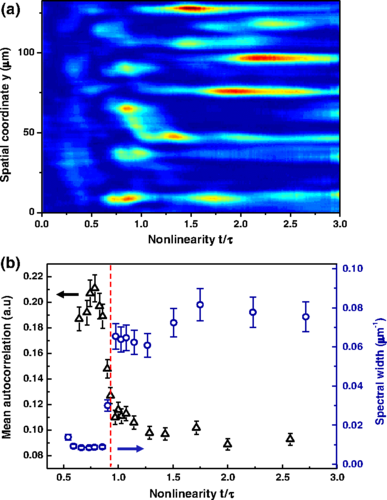 In a paper published in Phys. Rev. Lett. , D. Pierangeli, F. Di Mei,  G. Di Domenico, A. J. Agranat, C. Conti, and E. Del Re, report the direct observation of the onset of turbulence in propagating one-dimensional optical waves. The transition occurs as the disordered hosting material passes from being linear to one with extreme nonlinearity. As the response grows, increased wave interaction causes a modulational unstable quasihomogeneous flow to be superseded by a chaotic and spatially incoherent one. Statistical analysis of high-resolution wave behavior in the turbulent regime unveils the emergence of concomitant rogue waves. The transition, observed in a photorefractive ferroelectric crystal, introduces a new and rich experimental setting for the study of optical wave turbulence and information transport in conditions dominated by large fluctuations and extreme nonlinearity.

Theory of neuromorphic computing by waves

Machine-learning by rogue waves, dispersive shocks, and solitons We study artificial neural networks with nonlinear waves as a computing reservoir. We discuss universality and the conditions to learn a dataset in terms of output channels and nonlinearity. A feed-forward three-layer model, with an encoding input layer, a wave layer, and a decoding readout, behaves as a conventional neural network in approximating mathematical functions, real-world datasets, and universal Boolean gates.

Lake Como School of Advanced Photonics 14 – 18 September 2020 The school brings together experts in emerging photonic technologies, machine learning techniques, and fundamental physics who will share with young researchers their knowledge and interdisciplinary approaches for understanding and designing complex photonic systems and their practical applications. In the new era of artificial intelligence, algorithms and computational interfaces are broadly emerging as novel tools to do scientific research. The paradigms of machine learning also inspire interpretations and methodologies, in both theories and experiments.

In recent years, researchers question about the limits of the uncertainty relation. Hints from quantum gravity theories suggest that the Heisenberg principle should be generalized. Some considered implications in high energy physics, others have considered the mechanical motion of massive objects to look for possible tests of these supposed limits to the most important paradigm of quantum mechanics.